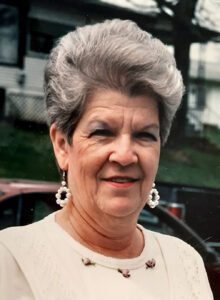 Martha E. Harlow, 86, of McConnelsville, passed away on Sunday, May 1, 2022, at the Genesis Hospital in Zanesville. She was born on November 30, 1935, in Stockport, to the late John and Freda Hooper Medley. She worked for the state of Ohio at the Athens Mental Health Center and was a member of the Pennsville United Methodist Church. She is survived by a son, Mark Parsons of McConnelsville; two daughters, Patsy (Steve) Klein of Melbourn, FL, and Donna (Paul Jackson) Parsons of Waterford; a sister, Mary (Cletus) Miller of Middlebuerry, IN; several grandchildren; great-grandchildren; and one great-great-grandson. She is preceded in death by her parents; first husband, Marion “Sug” Parsons; second husband, Carl Hale; third husband, Richard Harlow; a son, Dickie Parsons; a daughter, Betsy Rupe; grandson, Richard Parsons, Jr.; and three sisters, Margaret Mosier, Murle McGrew and Marilyn Parsons. Services were held Thursday, May 5, 2022, at the Matheney Funeral Home, in McConnelsville. Burial followed in the Pennsville Cemetery. Friends called on the family from 10 a.m. to 12 noon on the day of the services. To send a note of condolence to the family, go to www.matheneyfh.com.

Enter your e-mail below to join our mailing list and receive breaking news updates, special offers, and notifications when each new edition goes live online!